Comedian and fellow Journalist Simmi Areff, crashed the Skyline concert set to get this portrait. 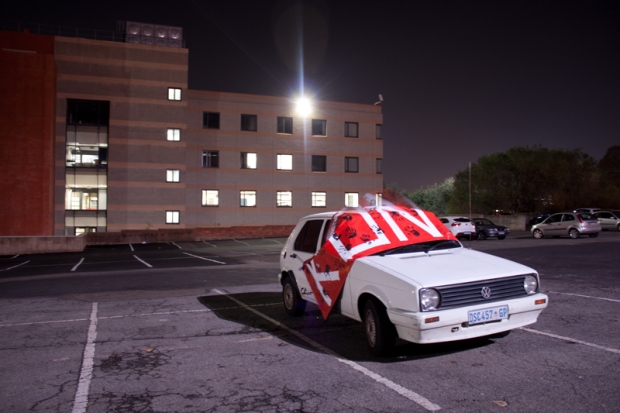 jaycabozphotography2012
Kony Covered: A car in the Wits Post Grad parking lot is covered by a Kony banner, four days after the KONY 2012 Cover the night awareness campaign.

jaycabozphotography2012
A fan takes photos of CrashCarBurn during their performance at the skyline concert last week. 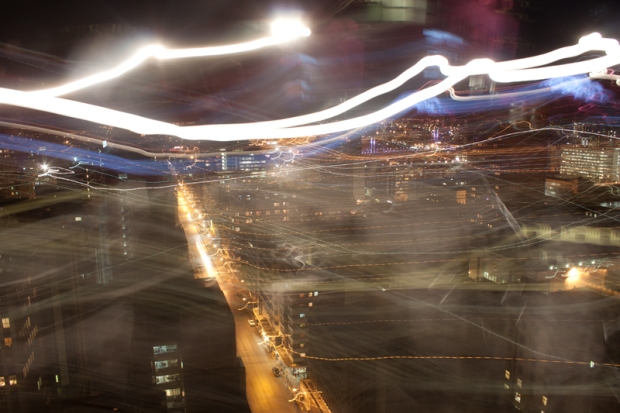 jaycabozphotography2012
Stars and Lights: A time exposure with a difference, i moved the camera before the exposure had finished and caught a whole 360 degree view in one shot

Paddlers catch the early morning sunrise on Emmarentia Dam as the season turns toward autumn. The dam was built in 1902 after the end of South African War. 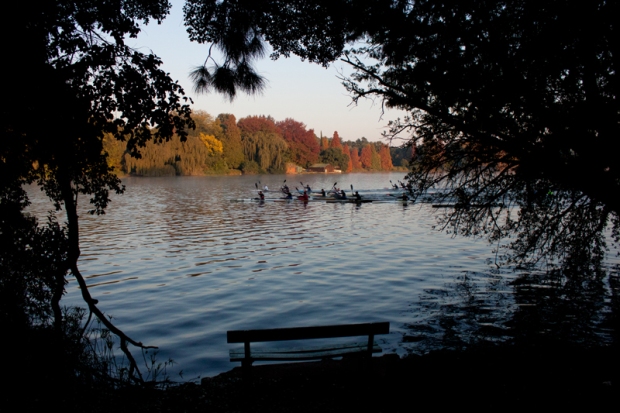 When a hockey ball caused 50 fractures to Andrew Hofmeyr’s skull, double vision and an almost complete loss of taste and smell, most people thought he was out of the game forever.

But this weekend, he made his first re-appearance for the Wits Men’s first team since 2009. Hofmeyr was hit in the face after a defender from the University of the Cape Peninsular miss-cleared a hockey ball into the Witsie’s path. He was representing Wits Hockey in a South African Students Sport Union tournament, held in Bloemfontein.

He broke his nose, suffered a collapsed sinus and fractured cheekbones. Two pieces of his skull had penetrated the first membrane of his brain. He leaked brain fluid from his nose for 10 days after the game. “I remember everything. I didn’t see the ball coming. After I got hit, one of my teammates just said, ‘Lie down Andy’. The umpire was saying that I must get off his turf and that I was bleeding all over it.”

“The doctors took an x-ray and said that I had broken my nose and would suffer from a minor concussion.

They gave me some pain killers and a splint for my nose and sent me back to the tournament.

“I spent the week in Bloem drinking and partying. We didn’t know anything was wrong.”

This was where the problem started, said Hofmeyr.

“After a week with the double vision at the tournament, I had to walk with my head sideways and wear an eye patch in order to see properly.”

When he arrived back in Johannesburg, Hofmeyr was sent to a brain specialist. “The doctors said that the alcohol I drank saved my life. It thinned my blood and prevented any clotting, which could have caused severe brain damage.”

Hofmeyr underwent two surgeries. The first removed the fragments in his skull, added a metal plate to reinforce his fracture and reconstructed his nasal passages. The second removed the fragments obscuring Hofmeyr’s vision. The operations cost just under R250 000, of which Wits covered R15 000 and his hospital plan the rest.

“They [doctors] said that I stood a 10% chance of ever regaining my sense of taste and smell…” Six months later, Hofmeyr was back on the hockey field. “When I arrived at trials everyone thought I was mad. I played the entire season with double vision,” said Hofmeyr.

This year, Hofmeyr, now studying Health Sciences at the University, decided to compete with the men’s side for the first time since his injury. He underwent a final surgery to fix his eye sight in 2011 and now has complete vision.

While parents worry about their children playing video games, most Wits students agree that gaming improves academic performance – but a Wits psychology lecturer says it’s all about balance.

Vuvuzela approached students after a recent Inspired Teachers Conference, in Johannesburg, at which Sizwe Nxumalo, economic science honours, told 300 teachers that playing video games could improve performance. According to The Star, he said gaming increased knowledge and provided a safe space for creative experimentation.

Ross Lelliot, masters in video animation, said the computer games he played as a child helped him develop his maths, English and typing skills.

Lelliot also said: “I didn’t have to do history in high school because I did Age of Empires.”

Hanli Geyser, a lecturer in the university’s new game design degree, said Age of Empires wasn’t accurate, because players could change the way history played out.

“If you play the game right, the Egyptians can beat the Romans…but you’ve already learnt about how Egyptian society worked,” she said.

Geyser cited Age of Empires and Civilization as good examples of games which enhance learning.

“Importantly, neither of those set out to be educational. They are just games that people enjoy playing.”

She said these games require players to “look at what you have and plan the possible future outcomes. It’s that strategic level of thinking, very much like chess, where you have to gauge the current situation…and be able to predict the possible outcomes, so that you can best prepare for them. And that’s learning.”

Geyser said even games like the cellphone game Bubble Breaker and shooting games develop learning skills. “This is because of the way games work as a construct. For a game to be interesting to people, it’s got to be challenging at all times.”

She said the fun in a game comes from the feeling of achievement which comes with “beating the game” and getting a high score.

“What does all this have to do with education? It instils a culture of learning…and a need to process and implement.”

Shanice Lewis, a 1st year BA General student, said games teach the brain to work fast, since one has to respond quickly.

“You see people who play really fast games. Eventually their hands move without them even thinking about it. That’s a twitch skill. It becomes muscle memory, like playing the piano. It becomes second nature.” Geyser also said games like Bubble Breaker teach pattern recognition, which she identified as an essential skill in the sciences.

Registered educational psychologist and Wits lecturer Joseph Seabi said the instant feedback players get from video games has both advantages and disadvantages. He said that students learn that they get immediate gratification, which is not case in real life.

Seabi also said some students spend too much time playing video games, when they could be preparing for tests and lectures. He recommended limiting game playing to one or two hours a day. Germanio Tjilunda agreed with Seabi.

“Seriously, I’ll be honest: video games don’t make you a better student. It takes all your focus, because you want to finish a particular mission,” said the 1st year commerce student, whose favourite game is FIFA.

“You spend four or five hours, and by the time you want to get to your work, it’s too late.” Lelliot urged students to manage their gaming habit.

Games may not hinder learning as previously thought.

Dodge This: Wits’ Jaime Martin jumps out of the way of a ball from a UJ penalty corner drag flick

The Wits Hockey Ladies A team drew 4-4 with varsity rivals University of Johannesburg A at an indoor premier league match at Fourways High School last night.

The match proved to be an interesting affair as the Wits ladies managed to play the entire game without a goal keeper.

From the start, Wits pressurised the UJ backline with three players up front, courtesy of the extra player who was not in goals. UJ’s two defenders fended off Wits’ challenges with calm composure for the first few minutes until gaps were closed down by the Wits front three, who forced UJ to use the side boards to get the ball out of their own half.

Demi Du Toit scores one of her goals during the game

However, it was UJ who scored the first goal of the game against the run of play.

Wits’ Demi du Toit replied in quick succession with a penalty corner drag flick goal of her own, which brought the score line back to even at 1-1.

UJ looked flustered after conceding whereas Wits continued to claim a number of penalty corners and shots. Wits only managed to score once more with another stunning flick by Du Toit.

Shortly before the end of the first half UJ came back with a good counter-attack strategy and put in their second goal of the match (2-2).

The second half went down to the wire as both sides looked to gain a goal advantage. UJ’s Jenna du Preez slotted in a third as the UJ side managed to find ways around Wits’ three player wall. Credit needs to go to Du Toit and the rest of the Wits defence after they made some crucial tackles in their goal area to keep UJ from scoring further.

The game opened up toward the final stages and with more space, Wits’ Jaimé Martin and Jules Cass wove holes through the UJ defence. Cass put in a third goal to equalize and then shortly after Du Toit completed her hat-trick to give Wits a one goal cushion at 4-3 with eight minutes to go.

A final goal scored in a penalty corner by UJ put everything square with five minutes to play. Player of match went to Demi du Toit who not only scored a hat-trick but also marshalled the Wits defence without a goal keeper.

The match was the final one of the season for the Ladies squad. This draw puts them safely in the middle of the Premier League Table. The ladies will begin their Outdoor League Season on Sunday 15 April against Vaal Technikon at the Isak Steyl Stadium in Vanderbijlpark.

Refreshments served in enamel cups, crate seats, and a group of men who sang work songs as if they were on duty underground.

This was part of the ambience set for guests who had come to Wits to bear witness to the official unveiling of the “unknown miner” statue situated at the entrance of the recently renovated Chamber of Mines building.

Deputy Vice-Chancellor, Professor Yunus Ballim explained the significance of the statue donated by Louis Wald, the son of the creator Herman Wald, and its relation to the celebrations of the institution’s growth.

“The statue shows the significance that the mining industry has had on the country’s  economy and the history of the institution” said Ballim.

Part of the sculpture’s symbolic meaning is that it pays homage to the unsung heroes who  contributed to the mining industry.

The statue is the first of the two sculptures that were donated to the institution as part of the Wits90 celebrations.